What Happens If I Replace Just One Tire? 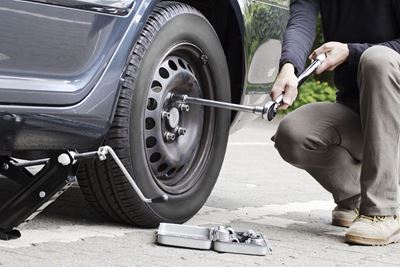 No matter how well your day is going, realizing that you suddenly have a popped tire is going to put anyone in a bad mood. It’s annoying, potentially dangerous if you’re on the freeway, and now you have to go pay for a new tire.

You make your way to the tire shop, and they try to sell you on replacing all four tires, but unless you’re shopping on RentAWheel.com or your local RAW shop, that can be a little spendy. So what if you just replace one tire?

Are the tire mechanics just trying to sell you multiple tires to add to their commission? Or is there an actual reason you should always replace more than one tire at a time?

So, Can You Replace Just One Tire?

The short answer to this question is probably not. The truth is that replacing just one tire can cause more trouble than it’s worth, and you’ll end up paying way more than if you just threw down for the two or even four tires.

Essentially, your tires all work in tandem, and the suspension system and driveshaft rely on the balance between each tire to maintain a healthy performance. When one tire is noticeably higher or lower, you start putting stress on the rest of your car, eventually leading to serious issues.

This is why rotating your tires is essential, because your front tires wear down differently than your rear tires.

When you purchase just one new tire, it’s more than likely going to be a different tread depth than its pair tire on the other side of the axle, which is why mechanics will generally try to sell you on at least two new tires at the same time.

Speaking of tread depths, the designs in your tires aren’t just there to look sick (even though we have to admit, the Toyo Open Country A/T III block design is pretty killer to look at.)

The tread is what helps your tires, and therefore your car, stick to the road, no matter what the situation. Whether you’re taking a sharp turn or driving in inclement weather, like rain or snow, the tread on your tires is critical to keep you and your vehicle safe from skidding out.

When you have a tire with a different tread depth than the others, in this case, one new tire out of four, you significantly reduce the amount of grip you could otherwise expect. Because the balance of the tires is off now, they just won’t hold on the way they would if they were all equally worn down.

We aren’t talking about your laptop, but rather the computer system within your car. Even if it’s got a few years on it, your car has an internal computer system that tells it whether you need to check your engine, if your tires are low, your doors are open, etc. It might even acknowledge your fuel economy if you’re riding in something new.

This computer system takes in information from a lot of different places, particularly your tires. When you have one new tire and three old ones, you risk creating unstable data within the system.

You might get false errors that your tires are low or that your anti-lock brake system is disabled. Since both are pretty critical pieces of data to have accurate representations of, it’s generally a good idea to avoid confusing your computer system with one new tire.

What About Two Tires?

Alright, so we’ve covered that buying one tire isn’t really a good idea. But what about just buying two tires?

If you’re in a situation where time and money are limited, and the idea of four tires seems like a lot, you can probably get away with just picking up two tires. Because the two new tires can fit the same axle, they’ll be balanced with each other and not put any strain on your suspension system.

Granted, with our flexible payment plan, we make sure that even the tightest pockets can afford to pick up a set of four all at once without having to drop some serious coin at one time. Not to mention we offer free installation when you swing by one of our Rent A Wheel locations which you won’t find at too many other shops.

Buying two tires might seem like a good idea, but it can throw off the maintenance and scheduling of your vehicle, which are both important to keep track of.

Aside from the obvious, startling realization that one of your tires has burst while you’re driving, it’s pretty important to know exactly when you should be on the hunt for a new set of tires.

Old Tread and the Quarter Test

The key component to look out for is your tread. As we’ve mentioned, this is what keeps you stuck on the road when you’re taking a sharp turn, and uneven treadwear, whether from buying a new tire or another issue with your suspension system, is going to be bad news.

But you don’t need to have uneven tread wear to need new tires. Even if they’re all evenly worn down, old tires aren’t going to do the job.

While the old penny test used to be the tried and true method to determine whether it’s time to start shopping, we firmly believe in the newer (but similar) quarter test.

Stick our first President's head in between your tire treads, don’t worry, he won’t mind. If you can still see the top of his dome sticking out, then it’s time to start shopping. The reason behind this is that the space between the edge of the quarter and where Mr. Washington's head begins is 2/16ths of an inch, which is just above the safe zone when it comes to your tread.

The difference between the penny and the quarter test is that the penny only has 1/16ths of an inch, at which point your tires aren’t going to be doing much good. It’s like waiting to evacuate the building until you can see the fire coming at you--you might want to head out once you hear the alarms.

Buying your tires just before they aren’t safe anymore gives you more time to shop and find the perfect match, like a set of these Pirelli Scorpion All Terrain Plus’ for only $36 per month.

Depending on where you live, you might experience a good amount of snow, and if that’s the case, you’re going to want a set of snow tires that will keep you safe. While all-weather tires get the job done in reasonable amounts of snow, they don’t quite cut it when you really need that extra protection.

Snow tires are designed with a stickier rubber than standards or even all-weather or all-season. While this isn’t helpful in the summer as they tend to wear out much faster on pavement, they add a much-needed amount of traction and stability when it’s really coming down.

As well, snow tires are designed with wider, knobbier treads. Combined with the stickier compound, these treads dig into the snow and push it out of the way, instead of building up on your tire and rendering your vehicle useless in a snowbank somewhere between work and home.

It’s important to know whether or not you need snow tires to make sure you’re ready for the cold season.

Buying one tire can be damaging to your other existing tires and the rest of your vehicle. While it might seem like a solid way to save a few bucks, it’ll more than likely cost you an arm and a leg in the long run.

At least try to get two tires at a time, and even then, your mechanic will, rightfully, suggest you get four. Granted, when you shop at Rent A Wheel, you might have to hold yourself back from buying more than just two.

5 Reasons Why Driving On Worn Out Tires Can Be Dangerous | FixAutoUSA.com

Computers In Your Car | AAMCOColorado.com

Tires , Car Maintenance
GET PRE-APPROVED
Congrats,
!
Not quite,
Loading font...